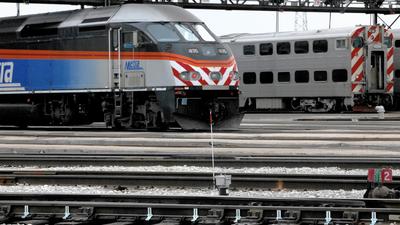 Metra has stepped up its preparations for the upcoming winter season to reassure riders that the commuter-rail service will be better equipped to deal with cold and snowy weather, the agency announced yesterday.

In addition to its usual winter preparations, Metra has acquired new snow-fighting equipment, upgraded its website and made other changes to improve its response and performance during severe weather, agency officials said in a press release.

“Nobody wants a repeat of last winter — the coldest and snowiest winter since Metra was formed in 1984,” said Metra Executive Director and Chief Executive Officer Don Orseno. “We believe the steps we have taken leave us and our riders better prepared for winter’s punch.”

Changes Metra has instituted since last winter include:

• the addition of three new high-pressure cold-air jet blowers to clear yards of snow and ice at a total cost of $1.25 million. The blowers, which can travel over roads or rails and have articulated arms to change the direction of the air, are more versatile than the rail-based hot-air jet blowers, according to Metra.

• additional switch heaters to the 20 most critical switches at Western Avenue Coach Yard. Acquired for $1 million, the switches will help prevent bottlenecks caused by switch problems that delay trains.

• an enhanced customer alert program so riders can determine precisely when they want to receive weather-related messages.

• winterization of the entire fleet, including repairs to 200 older cars ranging from 30 to 60 years old that had the biggest issues last winter with door defects, worn guides and corrosion.

“Metra will constantly seek improvements that boost our safety and reliability, even in the most challenging conditions, and we pledge to communicate to riders as much as possible so they can get where they need to go,” Orseno said.

Find out about Commitment and Fair Promise