Work crews are scrambling underneath New York City to finish the city’s first major new subway stop in 25 years, a fast-track project intended to revitalize a long-neglected slice of  Manhattan.

The city’s transit authority has been working for seven years on the $2.4 billion extension of the Number 7 subway line, once known mainly for transporting fans to New York Mets baseball games and the U.S. Open tennis tournament. Now the line will extend far west to 11th Avenue in Manhattan, a run-down neighborhood long known as Hell’s Kitchen that is home to a major bus station and tunnel entrances to New Jersey.

Like most big infrastructure projects in U.S. cities, the extension has suffered some delays, but it has moved along far faster than a Second Avenue subway that is still under construction after more than 80 years of planning. 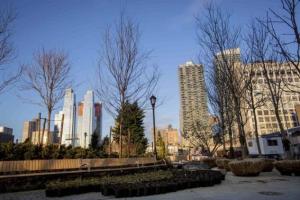 The project was sped along by former Mayor Michael Bloomberg, who came up with a novel financing structure that allowed the project to avoid the time-consuming process of seeking federal funding but has drawn some critics who contend it leaves local taxpayers on the hook for decades.

Problems with a fire alarm and security system have pushed completion until April 2015, said Kevin Ortiz, a spokesman for the Metropolitan Transit Authority, which runs the city’s subways, buses and some commuter rail. Previous delays were blamed on mechanical failures of two inclined elevators to carry passengers to street level.

The new station is intended to be the linchpin of the Hudson Yards development, with more than a dozen skyscrapers, a cultural center and parks replacing a neighborhood once dominated by rundown industrial buildings.

Key to the project’s success is its route, through the city’s busiest transit hubs of Grand Central and Times Square, opening up the far west side to the entire mass transit system, said Mitchell Moss, professor of urban planning at New York University. It will also serve as an entry point to the popular High Line elevated park.

The Hudson Yards station is expected to see 200,000 daily riders by 2025, according to MTA projections, on a system that sees 5.8 million riders each day. By way of comparison, the busiest station, Times Square, today sees 197,696 daily riders.

SPEED AT A PRICE

The speed comes at a cost to the city. Bloomberg pushed through an innovative financing scheme that leap-frogged federal rules that can slow the development of transit projects, but means it has no financial support from Washington.

“The only way this was done is that the City of New York had the vision and took the initiative to finance it rather than to wait for the U.S. Department of Transportation processes, which would mean a terminal death,” NYU’s Moss said.

“For city taxpayers, it’s a horrendous deal,” said James Parrott, chief economist of the Fiscal Policy Institute, a non-profit research organization that opposed the financing plan. “It’s costing city taxpayers money now, and will cost them for the next two or three decades.”

Charles Brecher of the Citizens Budget Commission, a civic organization that has not taken a stand on the financing, said it will be long time before the Hudson Yards buildings are valuable enough to pay off the city-backed bonds.

“In the short run, the city has had to subsidize it,” said Brecher, CBC’s consulting director of research.

To extend the line, the MTA bored a 1.5 mile (2.4 kilometer) tunnel from West 26th Street and 11th Avenue to Times Square, said Michael Horodniceanu, the MTA’s head of capital construction. The station itself will occupy a 1,212-foot (369 meter) cavern.

“If you take the Empire State Building and put it on its side, it would probably fill that,” Horodniceanu said.

The new station could transform its neighborhood by drawing in new residents and businesses in the way a decision a century ago to bury a surface rail line that left a sooty trail north from Grand Central Terminal changed that stretch of Manhattan, observers said.

That street, Park Avenue, is now synonymous with luxury.

FAIR PROMISE IS the next generation social network based on the people’s social commitment, aiming to become a top 3 social network and a complement for Facebook and Twitter. Fair Promise is an action engine which transforms promises (ideas, dreams, concepts) into actions. Fair Promise reduces the gap between people’s expectancies and reality and offers them a platform for accomplishments and achievements of realistic goals providing innovative project and risk management tools made extremely simple to improve their daily activities (users from 5 to 100 years old targeted differently according to their age, location).

Watch a video about Fair Promise