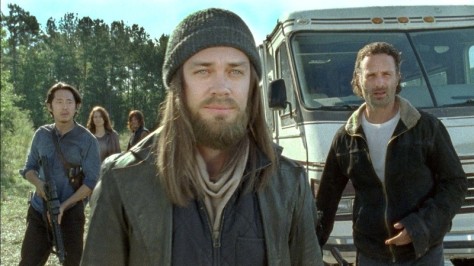 And here’s the latest recap from The Snarking Dead for The Walking Dead, Season 6, Episode 11, Knots Untied.  Enjoy!

Mixing the fantasy with the reality to make people interested in the many things that are happening in advanced materials.

Now the materials people can’t match Stan Lee’s and jack Kirby’s overactive imaginations.  I can’t get a catalog with the great properties of the latest Adamantium or look up a data sheet on the flexibility of Vibranium and it’s resonant frequencies. Those things remain unobtanium.  But there are a lot of things going on out there that is giving us incredible new materials that are going to have a huge impact on our lives.

An ideal night for a nice quiet torpedo attack.

by: Capt. Arleigh A. Burke

There may have been blacker nights than Thanksgiving Eve, 1943, [26 November 1943], in the South Pacific, but none could have been more completely blacked out with regard to information of the enemy.

The Solomon Islands campaign, one of the decisive battles of WWII in the Pacific, was at its height and the issue had not yet been resolved.  Our destroyers were streaming north in search of the Japanese, who were reported to be evacuating their forces from the islands of Buka and Rabaul.

Suddenly our ships made contact with an unidentified force – strength unknown – and closed to fight it out.  The battle continued throughout the night.  One after another, the breaks fell to us.  The pieces of the puzzle gradually…

Perspectives on Life, the Universe and Everything

Where will you go
How will you hide
Give me an answer now
Decide, decide
Dame ruthless
I am restless,
everything tasteless
Unable to move
Except in pursuit
Nothing suits
Except you
my life flavour
yours forever
Just say yes
please

Confused, harassed
Quite embarrassed
Life isn’t a game
putting stalkers to shame
your infatuation has to end
Once intensity subsides
Real you will appear
Then I will decide

In fourth-quarter 2015, UPS delivered 1.3 billion packages, up 1.8 percent compared with volume from the same 2014 period. The primary driver: an extremely active peak delivery season between late October and December.

Propelled by busy holiday shoppers and retailers — who rang up robust online purchases — UPS’ fall peak volume reached 612 million packages versus 572 million a year earlier. Some hubs that process 100,000 packages on a typical day were sorting 200,000 daily during the harried holiday season.

“It was the heaviest peak we’ve ever had from a volume perspective,” says UPS Vice President of Corporate Transportation Services Ken Buenker.

And kudos to the railroads for providing exceptional on-time performance throughout the period despite the tsunami of packages, he says.

The world’s largest parcel delivery company is served by all the Class Is, as well as dozens of regionals and short lines that…

The X-Files is back now!