Do you find yourself stuck in the office almost every night while you watched the rest of your colleagues pack up and leave for home? Yet when you and your boss questioned you why and where you spent your time during office hours, you can’t really give a good explanation. It is not that you are unproductive or have poor time management, it could be that you are spending too much time and holding on to issues that couldn’t change any results of your work or help you in any way.

Drafting angry internal emails
There will be times where you are frustrated at how other colleagues or department conduct their jobs. While it is right that you make a stand how their decisions affect you, drafting yet another angry email to them will not turn things around, instead, it might even make relations worsened between you and the recipients.

Today we have disturbing aspects of the direction that American Education is headed into covered by Dr. Farrell from separate avenues, while we also have two links on the dangers of vaccinations.

If you are a parent, know anybody that vaccinates regularly, or are someone seeking additional information, please check out Jon Rappoport’s piece on vaccination.  Its a great starting point for those that haven’t begun sifting through the data available.

In the cornerstone of corruption, Big Pharma’s ways are covered at length by Dr. Mercola, while the folks at DailyBell penned an excellent piece regarding how financial privacy is undergoing a full-court press.

There are eight links in all, but each with vital information for those seeking information that the mainstream media rarely covers.

Hope all is well.

There’s an amazing variety of stuff up there.

First a piece from the Gothamist.

The temptation to put a small cottage or other structure on the roof can be overwhelming.

They even have bars up top.

Here’s an album of NYC rooftops. 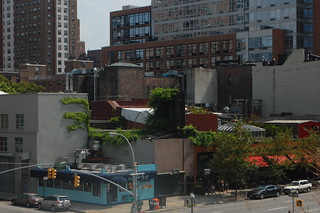 While researching magazines to submit my writing, I discovered the need for sci-fi poetry. The inspiration for this post comes from my reading of a NEO (near Earth object), an asteroid destined to pass the Earth on Friday, April 13, 2029.  When it was first discovered in December 2004, NASA estimated the asteroid (named 99942 Apophis) had a 2.7% chance of slamming into the Earth.  We now know this asteroid will be a near miss.

This  is  the  Drayden  Schoolhouse,  a  school  for  African  American  children,  in  Piney  Point,  Maryland.

ERIK LARSON, known for his nonfiction narrative works such as The Devil in the White City and In the Garden of Beasts, will speak at the University of Wyoming on April 20 at 1:30 p.m. His talk is free and open to the public. College of Education auditorium, University of Wyoming, 1000 E. University Ave., Laramie, Phone: 307-766-3279

SAN FRANCISCO WRITE OF WAY FESTIVAL “brings together over thirty independent Bay Area literary organizations and reading series, as well as creative writing courses and communities at SFAI. The eight-hour, day-long event includes readings, performances, panel presentations, a bazaar, and creative writing workshops. Write of Way is committed to featuring emerging voices, writing on the margins, and celebrating the Bay Area’s richly diverse literary community. The event is spearheaded by SFAI English Department faculty and staff, paying homage to SFAI’s rich legacy of collaboration between artists and writers. This event is…

Myths of the Mirror

Most writers have learned the importance of reading their words aloud. It’s advice I heeded early on and am happy to pass along.

Writing works on myriad levels. On one level, it’s the mechanical delivery of a story, the typing of words according to rules. It’s fingers on keyboards, reams of paper and editing drafts. Beneath the surface, writing is meaning-making through narrative, tapping universal themes and archetypes that existed before man first etched his carvings into cave walls.

As an art form, writing has the ability to transport a reader into another world. We paint with words on the mind’s canvas, compose the music of language, stir smells, tastes, and tactile impressions. The goal is emotional immersion, being present in the experience.

I have an irksome sensitivity…

Myths of the Mirror

All modified images from pixabay

I don’t cuss. Well, rarely, and when I do, it usually makes me laugh, which defeats the purpose of expressing the strength of my irritation.

Yet, my characters cuss, some worse than others, and my cursing characters have elicited some negative reviews. It was a risk I chose to take, and I’m not shocked by the occasional blow back. Since profanity is controversial, authors should weigh whether swearing will occur in their books, and if so, what kind and how much.

Consider that these choices apply to a blog too. Readers may forgo your cuss-free book because of cursing on your blog. Just saying.

Certain books lend themselves toward cursing more than others. Carrie Rubin of The Write Transition commented on her blog that, “a 17-year-old, inner-city Cleveland bully would not call his victim a “chubby poo-poo head.” I would agree. The same may apply to…