It first began with a wealthy man named Arostogas.  He lived in very ancient Rome.  At the time, he saw many without money.  So he established many banks across Rome.  That day was known as Banksgiving.

Later, King Atropicees and Queen Sophiltrees of the Nobitnose Kingdom were without a child, and they were up there in age.  They needed an heir to continue the kingdom.  Someone then surrendered a child to be a child of the royal family, and they took him in.  While in the royal palace, the child became very cranky complaining about everything.  The day of the child’s arrival was…

I wish to express my thanks to each and every one of you !!

For those of you living where there is no official Thanksgiving Day – look around – family, friends, Freedom and life itself – all enough to give thanks for each day !

They’re celebrating Thanksgiving on this very day,
My thoughts are at home, though I’m far away;
I can see everyone, eating dinner deluxe,
Whether it be chicken, turkey or even duck;
The fellows over here won’t whimper or moan,
They’ll look to the next one and hope to be home.
Truly and honestly, from way down deep,
They want you to be happy and enjoy your feast.
These holidays are remembered by one and all,
Those happy days we can always recall.
The ones in the future, will be happier, I know
When we all come back from defeating the foe.

In May of 1897, American author and humorist Samuel Clemens (or Mark Twain) arrived in London as part of a lengthy world tour. There he was greeted by the news that his cousin, a Mr. James Ross Clemens, also in London, had been gravely ill.

The cousin recovered, but news spread across the ocean that Clemens had grown ill and was, in fact, on the verge of death. The news sparked tremendous worry and speculation that the beloved author would soon die. 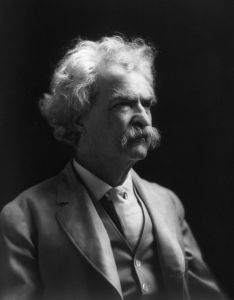 Samuel Clemens, who did not die in London in 1897, or in the great Facebook death glitch of 2016. By Photographer: A.F. Public Domain, via Wikimedia Commons

It was Frank Marshall White with the New York Journal that finally set the record straight when he sent a cable to Twain inquiring after his health. The author replied, explaining the confusion between his identity and that of his cousin’s…

By M.E. Singer
Why the sound of crickets towards one critical component required to competently address our nation’s infrastructure deficiencies? For no valid reason, inter-city passenger rail corridor development continues to be missing within the context of the policy options to comprehensively approach our issue of re-building infrastructure.

Why would the well documented benefits of intercity passenger rail be neglected here, particularly given the increased demand for Midtown-Midtown mobility? Such a well planned rail infrastructure program would certainly be substantially less cost than a mile of interstate highway, or, another runway and apron. How do we continue to avoid “the elephant in the room” of airport gridlock due to so many flights serving markets under 500 miles; let alone the increased costs and reduced services to those places?

As evidenced in the Northeast Corridor, intercity rail has earned a well established position, offering schedule frequencies convenient to business and leisure…

Hi there!Formula Xhas designed an easy to use and follow nail polish set that contains their best selling four-step manicure kit. The Formula XSystem XCEL Gel-Like Nail Polish promises toextend the wear of any Formula X nail polish for up to ten days of color, gel-like shine, and plumping effect of gel.