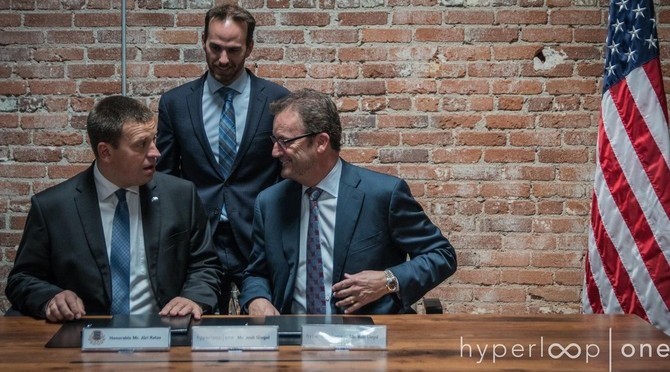 Prime Minister Jüri Ratas (Center) and executives representing Hyperloop One signed a letter of intent in Los Angeles aimed at cooperating as part of the Tallinn-Helsinki tunnel project.

“Although the new transportation technology is still being developed and the main testing still lies ahead, Estonia must display interest and inquire as to how the new technology works and what the cost involved are,” Ratas said according to spokespeople.

The idea behind Hyperloop is to develop a technology for the transportation of passengers and goods at speeds of up to 1,080 kilometers per hour inside capsules that move in a vacuum created in special tunnels.

Pneumatic tubes, which employ a technology similar to Hyperloop, have been in use since the late 19th century and remain in use transporting cash in supermarkets and banks, for example. If the capsules were made large enough to accommodate a busful of people or a shipping container, for instance, developers of Hyperloop technology are convinced that the world would no longer be the same, the Estonian government press office said on social media.

“Whether and how the superfast connection could provide a good opportunity for growth and creation of new jobs, time will show,” the prime minister said after the meeting.

Ratas said following an Aug. 24 government meeting that the purpose of the letter of intent to be signed with Hyperloop One was “rather symbolic, with Estonia expressing its readiness for cooperation.”

According to the prime minister, the Finnish government has taken a similar step. “[The link] cannot stop in the middle of the Gulf [of Finland] after all,” he said. “Once both countries express this readiness, the relevant impact assessments and a cost-benefit analysis must be completed.”

Ratas did not wish to comment on when, if ever, a Hyperloop would begin operating between the twin capital cities, but noted that the first tests of the technology with humans have already been conducted and the desire exists to develop it further.

“I believe Estonia has always stood out in that when these kinds of bold solutions, novel solutions, exist, we analyze them and are on board,” he said at the Aug. 24 government press conference. “This is the purpose of this. Estonia assumes no financial obligation with its signature under the letter of intent.”