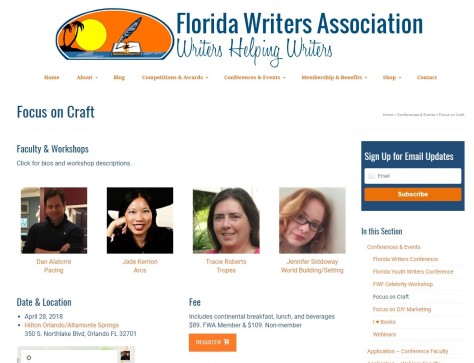 I’ll be presenting “Pacing” at the upcoming FWA Writing Workshop on April 28, 2018.

Yep. People are gonna pay to listen to me talk again – and you could be one! I’ll be dazzling attendees with my presentation, then dazzling the bartender – and possibly you – in the lounge afterward.

Seriously, I’m flattered to be asked to present these topics, and you’d benefit for attending.

Story pacing—keep a reader glued to their seat and turning pages. (That one’s by me.) But I’ll be sitting in on some of these other workshops, too:

All good stories are propelled forward by conflict and change. In this session, discover the importance and the difference among character arcs, story arcs, and series arcs. We’ll also discuss how to seamlessly blend all three into riveting chapters and page-turning stories.

Here’s an entry for Tuesdays of Texture for week 4.

This was found on a recent stroll around downtown Montreal.

A single fuzzy baby bootie sitting in a melting snowbank.

It has kind of a sad vibe to it, especially if you spend too much time pondering how it got there 😉 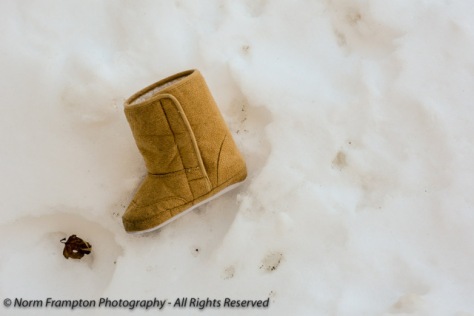 Why not head on over and check them out? You could even add your own and play along.

Thanks you for looking 🙂

I started this poem last night and finished it this morning. In keeping with the subject matter, the poem itself has a little something hidden inside. See if you can figure it out. ;p This poem rhymes in couplets and has inconsistent meter.

hiders of secrets and holders of lies,

your weak-mindedness will be your demise.

prey on innocence, but your conscience chides:

only sharp swords are meant to have two sides.

can you maintain your facade for forever?

really, what an impossible endeavor.

if you don’t care what others think, you should:

trust in a double-word? nobody would.

even though lies are the notes of your song,

secrets can only be kept for so long.

Overview: While the subject of World War II has quite often frequented my book selections over the years, I always enjoy finding a narrative that presents a novel perspective or context.  For example, recently I’ve read The Zookeeper’s Wife and Dunkirk, which both of which detailed events I previously knew very little about, despite having read many books regarding this aforementioned time period. Blitzedcontinues this theme as Ohler details the use of drugs in the Third Reich, with specific focus on the soldiers, Hitler, and his personal physician. While this concept proved thought provoking regarding Hitler’s actions, much of Ohler’s evidence entailed matching the physician’s treatment notes with the corresponding descriptions of Hitler during meetings following the injections. Ohler also makes a bold claim that the drug Pervitin, which is crystal meth, was used liberally by not only soldiers but also…

Readers, here is a fascinating compilation of screaming skull ghosts from various locations in the UK.  Intriguing – screaming skulls are strictly a British thing, per this post!   Read on for more!  From real-british-ghosts.com via Screaming Skull