New York Gov. Andrew Cuomo joined Metropolitan Transportation Authority (MTA) leaders and New York City elected officials to mark the restoration of normal R Line subway service between Brooklyn and Manhattan, following the rebuilding of the Montague Tube damaged during Hurricane Sandy.
The $250 million project was completed ahead of schedule and under budget, during a full shutdown of the subway tunnel that runs under the East River. During the October 2012 storm, about 27 million gallons of water poured into a 4,000-foot stretch of the tunnel. The saltwater corroded every element of subway infrastructure, from electronic signal equipment to lighting to steel rails, according to MTA.

The tunnel repair project’s completion marks “another huge step forward to repair the damage and strengthen the system to withstand the next major storm,” Cuomo said in a press release.

“New York’s transit network suffered more damage during Sandy than anyone at the MTA has ever seen in our lifetimes. The effort required to rebuild the Montague Tube was nothing short of heroic,” said MTA Chairman and Chief Executive Officer Thomas Prendergast. 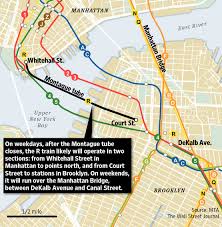 The Montague Tube was shut down Aug. 3, 2013, to provide workers unfettered access to remove damaged equipment from the two tunnels and demolish concrete and terra cotta duct banks in both tubes that had collapsed. Construction crews had to enter the 4,000-foot section under the East River from entry points in Manhattan and Brooklyn, removing all debris and bringing in all equipment and tools through the tunnels themselves. Crews replaced 11,000 feet of track, 30,000 feet of concrete and terra cotta duct banks, 75,000 feet of power cable and 200,000 feet of communications cable, MTA officials said.

This tunnel was opened in 1920

The Metropolitan Transportation Authority is leaning toward a weekend-only format for closures of the Cranberry Street Tunnel, which requires substantial work to replace equipment damaged by flood waters during Hurricane Sandy. Work is expected to start within the first three months of 2015.

Find out about freedom and Fairpromise