We ran articles on 1956  and and got lots of readers, so here goes 1958. These notes come from The Pennsylvania Railroad Technical & Historical Society Lots of  years in Pennsylvania RR history are available. But what is great is that they cover lots of other railroads. Internal Pennsylvania RR material not included.

New Haven drops 10 of 38 New York-Boston trains and 4 of 32 New York-Springfield trains; The Senator discontinued between Boston and New York; through coaches to Grand Central discontinued on The Pilgrim; other trains discontinued include The Mayflower ,

The Commander, The Murray Hill, The Bostonian/New Yorker; eastbound Narragansett 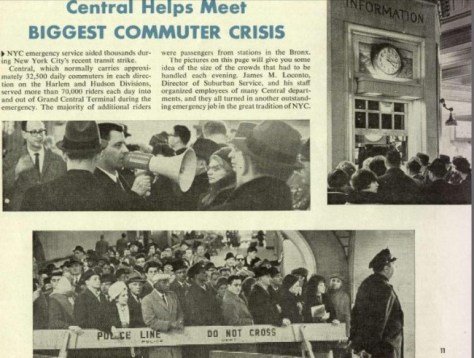 A friend recently purchased a brass button and was wondering if you could shed some light on it.  it appears to be a sleeve/cuff button and was made by the “Russell Uniform Co., NY.” It has a typical brass loop on the rear and is approximately ⅝” in diameter.   Regarding buttons, picture from 1960, describes them as “flat.” His is domed.
I am inclined to think that it is an early NYC Police (transit) button as opposed to a NYC RR Police as it uses “NYC” as the jurisdiction.

NY City Transit police came about in 1953 when the 3 subway lines plus various bus companies were consolidated as “New York City Transit Authority”.